Kyrie Irving And The Celtics Are Rediscovering Their Playoff Mystique Together

BOSTON — Back in September, when the Boston Celtics convened for training camp, they had grand visions for where the 2018-19 NBA season could take them. With LeBron James on the West Coast, and with Kyrie Irving and Gordon Hayward once again healthy, the Eastern Conference felt like it was theirs for the taking — both this season and for years to come.

Then the games began, and the trouble started. There was an 82-game regular season full of fits and starts, in which Boston would take a step forward — only to almost instantly take another one backward.

There was drama — created, in various instances, both by the Celtics themselves and by others — that repeatedly enveloped the team like a thick fog. And, at every turn, there was one person — Irving — at the center of all of it.

At times, it would’ve been fair for one to wonder if it was all worth it. Wednesday night, though, provided the answer to anyone who still wasn’t sure:

Of course it was.

For the first time in a Celtics uniform, Playoff Kyrie arrived at TD Garden. And 37 points, 6 rebounds, 7 assists and 40 minutes later, the Celtics left the building with a 99-91 victory over the Indiana Pacers and a 2-0 lead in this best-of-seven first-round playoff series.

“It’s pretty peaceful,” Irving said of having his first memorable playoff performance while playing for the Celtics. “I’m just happy to be able to be part of a lineage of great players that have put on some unbelievable performances here in the TD, as well as in the old Garden.

“But it felt good to be here in this position, playing in this arena. It’s just been a long journey having those two knee surgeries and watching the team last year. And finally getting a chance to lace them up for the Boston Celtics in the NBA playoffs? There’s nothing like it.” 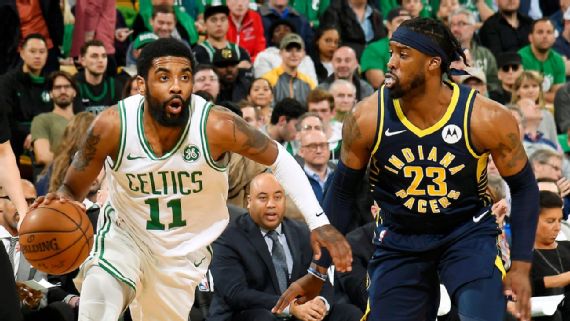 There are also few things like Irving in full flight in the postseason. And in a game the Celtics easily could have lost, Irving did just about everything to ensure that they didn’t.

As the Pacers threatened to blow the game open in the third quarter — just as the Celtics had done to them in Game 1 on Sunday afternoon — Irving scored 10 of Boston’s 16 points in the frame, and hit four of the Celtics’ seven shots, to keep them in the game.

Then, after Irving’s teammates went on an 8-0 run to trim a 12-point deficit to four while he rested to start the fourth quarter, Irving came in and scored nine consecutive points to put the Celtics back in front.

“Just sit back and watch,” Jaylen Brown said of Irving. “Kyrie has the ability to take over games. That’s what makes him special.”

Indiana was well aware of that, too. And after watching him take over the game, the Pacers were determined to make sure he didn’t beat them down the stretch.

And, in a sense, they accomplished their goal. After Irving hit a free throw with 3 minutes, 12 seconds remaining, he didn’t take a single shot the rest of the game. But it was no coincidence that, as the game wound down, the rest of the Celtics found themselves with acres of space within which to operate.

Irving’s mere presence on the court, and the threat of him taking over as he has so many times before in his career in precisely those types of moments — including a game-winning layup against these very same Pacers here late in the regular season — was enough to send Indiana’s defense scrambling, and his teammates were happy to take advantage of it.

Suddenly, a team that’s built to get the ball to Irving in late-and-close situations instead had Jayson Tatum and Hayward shaking free for buckets inside the final minute to seal the win for the Celtics.

“Kyrie was incredible in coming back, and when he gets on a run like that, he’s going to draw even more attention than he already draws, which is as much as anybody draws in the league,” Celtics coach Brad Stevens said. “And so, in the last couple minutes of the game, he just made the right play.

“I was really encouraged by the way we shared the ball, and just made the right play. And then Kyrie was special,” Stevens added.

The Celtics needed him to be special — and, even as he was, they still almost lost. The Pacers couldn’t get going offensively in Game 1, building an 11-point first-half lead but following that up with an eight-point third quarter and scoring 74 total points. Indiana made several strategic adjustments in Game 2 and was much more effective.

At least, that was the case until the fourth quarter. Indiana, to put it simply, melted down after leading Boston 82-70 with 11:20 left to play in Game 2. The Pacers shot 2-for-19 in the third quarter in Game 1, and they followed that up by shooting 4-for-17 from the field in the fourth quarter of Game 2. Indiana committed two inexcusable turnovers in the final 30 seconds to prevent itself from having any chance of tying the game, and watched the Celtics ping the ball around the court before Tatum threw down a dunk to put the game out of reach.

Overall, the Pacers missed 13 of their final 16 shots while the Celtics outscored them 29-9 in the last 11:20 to complete a second consecutive comeback from a double-digit deficit to start the series. The 2019 Celtics are the fifth team to overcome double-digit deficits in the first two games of a playoff series over the past 20 postseasons, and the first since the 2017 Celtics did the same against the Washington Wizards in that year’s Eastern Conference semifinals.

It’s a credit to Indiana that, despite not having its own star, Victor Oladipo, and a limited roster in terms of offensive production, the Pacers have been able to make these first two games on the road as competitive as they have.

But it’s against exactly this kind of opponent, and in just this kind of situation, that stars like Irving make all the difference. It’s why the Celtics swung for the fences to trade for him in the first place. It’s why the Celtics hope to convince him to stay when he becomes an unrestricted free agent this summer, and then promptly swing for the fences again — using the many trade assets they have at their disposal — to trade for Anthony Davis, and create what they think will be a title contender for years to come.

How the next few weeks shake out could very well determine whether or not that reality comes to pass. And, given how topsy-turvy this Celtics season has been, it is far more likely than not that there will be plenty of bumps in the road before Boston’s playoffs are over.

Wednesday night, though, was a reminder that for as taxing as these past few months have been here, having a talent like Irving ultimately makes it all worth it.

Coronavirus conspiracy theories make Fauci the villain, because someone has to be

Coronavirus and the ‘new normal’: What’s coming in the months ahead