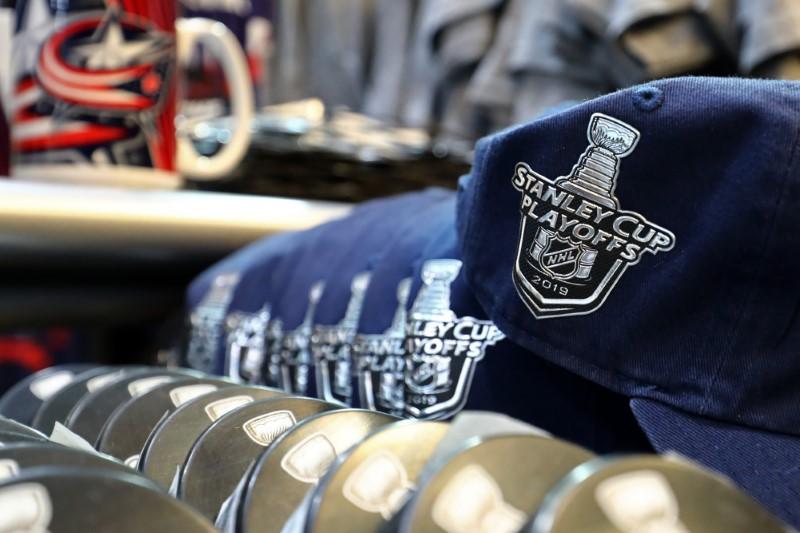 FILE PHOTO: Apr 14, 2019; Columbus, OH, USA; A view of the Stanley Cup Playoffs logo on a hat in the team store prior to game three of the first round of the 2019 Stanley Cup Playoffs between the Tampa Bay Lightning and the Columbus Blue Jackets at Nationwide Arena. Mandatory Credit: Aaron Doster-USA TODAY Sports/File Photo

(Reuters) – The National Hockey League said on Monday it would purchase carbon credits to offset airline emissions of heat-trapping greenhouse gases during the Stanley Cup playoffs.

For the first round of the playoffs, which has the highest number of teams traveling and is currently underway, the NHL will offset more than 465 metric tons of carbon emissions, equivalent to taking 99 cars off the road for one year.

The league will purchase the offsets from Portland, Oregon-based Bonneville Environmental Foundation, which operates offset projects that capture or cut greenhouse gases emitted from animal waste, landfills and fossil fuel use.

The announcement, which coincides with Earth Day, is part of the NHL’s efforts to address climate change.

Last season the NHL published its second Sustainability Report, which examined its commitment to ensuring all levels of hockey — from the frozen ponds it was invented on to professional arenas — thrive for future generations.

The report estimated that in the coming decades the average length of the skating season may shrink by one third in eastern Canada and by 20 percent in western Canada.

In response, the league has ramped up efforts at its arenas to cut carbon emissions, reduce waste and conserve water, among other initiatives.