We continue to shape life on Earth, and threaten our survival, in unexpected ways.

It’s Earth Day, and Google is celebrating with a Google Doodle of six amazing creatures to remind us we are not separate from nature (this year’s theme is Protect Our Species).

This Earth Day arrives at a sobering moment. The world is warming faster than ever. The oceans are rising. Thousands of migrants are fleeing environmental disasters. Taxpayers are paying billions to rebuild communities after climate-linked wildfires and hurricanes destroyed them. The Trump administration is unraveling policies designed to protect our health and environment at a stunning pace.

At the same time, new voices are helping us see and understand the urgency of the crisis before us, focusing us on what we need to do (i.e. get off fossil fuels). A fresh wave of young environmental activists is taking to the streets to strike for a safe climate. From classrooms to courtrooms to Congress members pushing the Green New Deal, an ambitious new suite of tactics are being deployed to defend the environment.

This Earth Day, it’s worth taking stock of what we keep learning about the spinning world we inhabit and how we’re responding to crises at hand. In keeping with the tradition started by former Vox writers Brad Plumer and Joseph Stromberg, here are seven of the coolest, most intriguing, and most alarming things we’ve learned about the Earth since the last Earth Day. 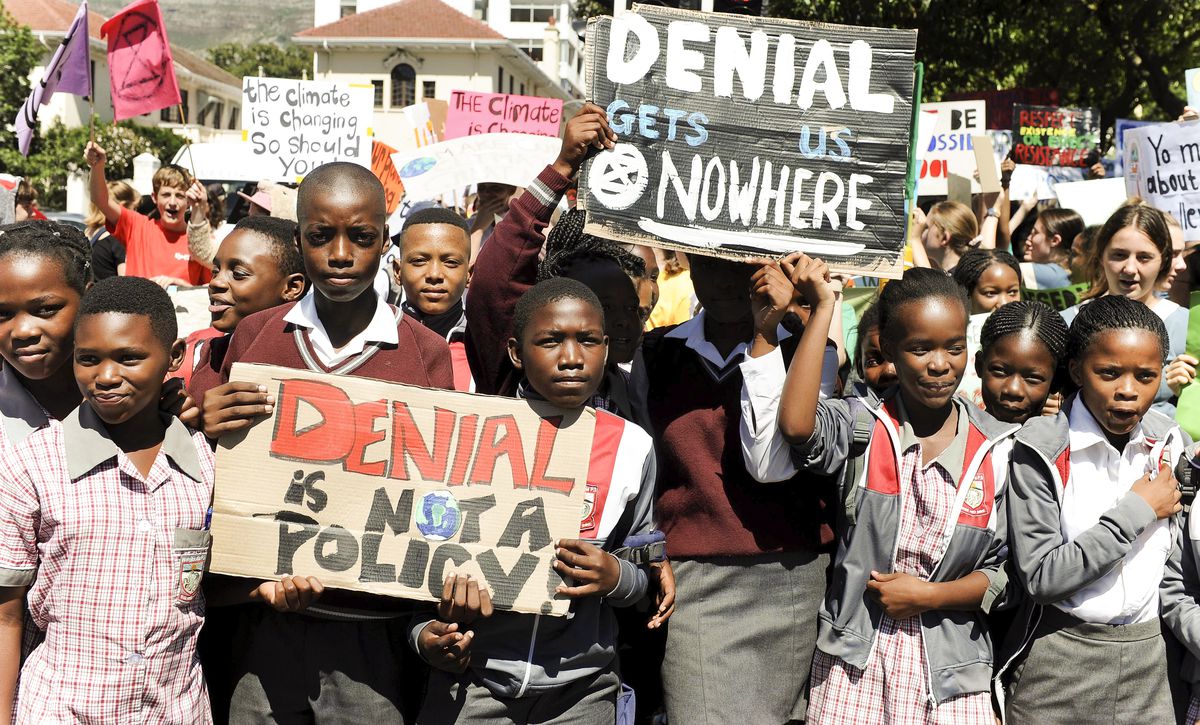 Many people under the age of 18 right now may be around to see the end of the century. And a growing number of them are not pleased with the climate they’re inheriting. Our current trajectory puts the planet on a course to warm by 4 degrees Celsius by 2100, creating a world that will be devastated by disasters, droughts, disease, and food shortages.

In March of this year, students in more than 120 countries went on strike from school to demand action on climate change. These climate strikes are part of a youth-led climate activism movement, with another global strike planned for May 24. Here’s Irene Kananura of Kampala, Uganda who was striking this past Friday in the heat:

I can bare the hot sunshine on a roadside every friday as i strike to fight for my future. climate change is real, we need action NOW. @GretaThunberg@Fridays4future@Fridays4FutureU pic.twitter.com/COCeyPapIz

The #FridaysForFuture strike movement began when Greta Thunberg, a 16-year-old from Sweden, began skipping school and picketing outside the Swedish parliament to protest her government’s inaction on climate change in August.

She has since become something of a global ambassador for youth anxieties about climate change and has pressured European Commission President Jean-Claude Juncker to commit 1 trillion Euros to fight climate change. “Our house is on fire,” she said in a January speech at Davos. “I don’t want you to be hopeful. I want you to panic. I want you to feel the fear I feel every day. And then I want you to act.” She and other young people show no signs of letting up the pressure.

2) Plastic is increasingly not fantastic

Whales washing ashore filled with plastic have become a distressingly familiar sign of the immense amount of plastic we’ve allowed to wash into the ocean. A pregnant sperm whale was found with 49 pounds of plastic in her stomach along the coast of Sardinia, Italy earlier this month. In March, a Cuvier’s beaked whale was found vomiting blood off the coast of the Philippines. It died a few hours later, and 88 pounds of plastic waste was discovered in its stomach.

Every year, we let roughly the mass of the Great Pyramid of Giza in plastic to flow into the ocean, where it breaks down into small chunks or particles and accumulates in sea animals large and small. 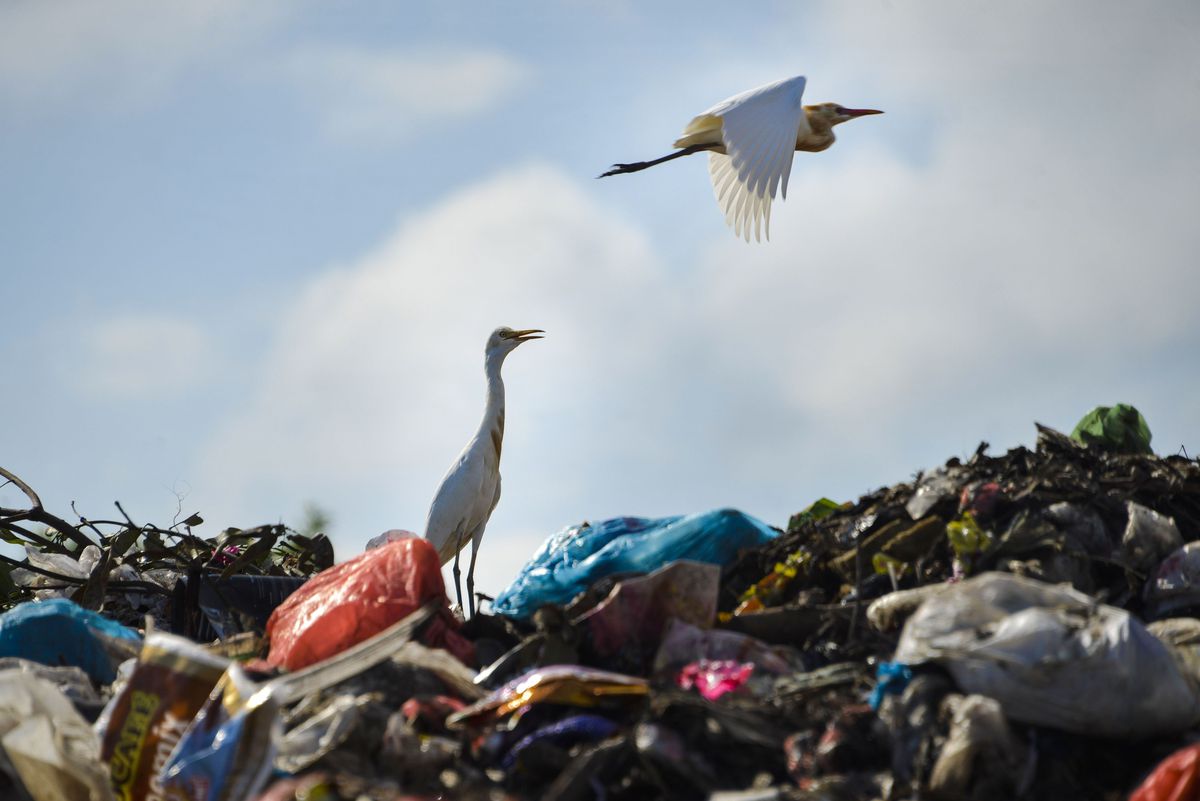 We only recycle about 9 percent of the plastic we produce, and even that tiny fraction is under threat. China, the world’s largest recyclable plastic importer, began to slash its intake last year. The move has rippled throughout the world. It’s already forced some recycling programs in the United States to shut down entirely.

Yet addressing the plastic crisis is becoming a bigger policy priority, and more countries are now banning single-use plastics — including plastic cutlery and straws. Meanwhile, the race is on to develop new environmentally-safe materials, to repurpose existing plastics, and to harness bacteria to digest our waste.

3) Life is so much heavier than we thought

Have you ever contemplated how much every plant, fungus, bacterium, insect, bird, fish, and mammal all put together would weigh? Maybe not. But last year, scientists did just that, calculating the total mass of all life on earth as we know it.

Vox’s Javier Zarracina and Brian Resnick put together a helpful visual of the mass of all life. A key insight is that some of the smallest creatures carry the greatest weight. The mass of bacteria is 1,100 times more than the mass of all humans put together, for example. 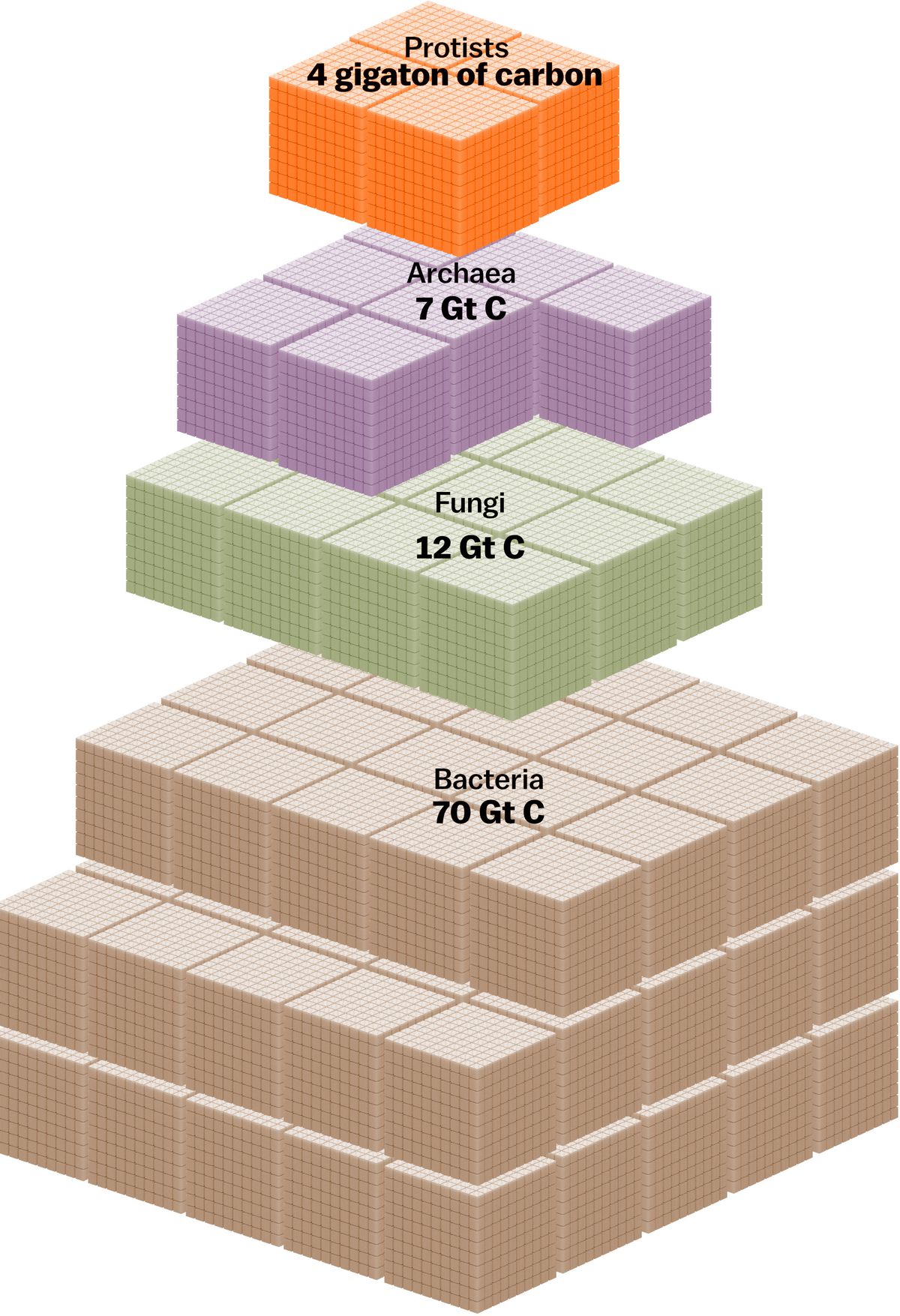 Each large block of this tower represents a gigaton of life, and the blocks are grouped into broad kingdoms. Javier Zarracina/Vox

But despite the mind-boggling mass of every maple, elephant, cricket, worm, mackerel, dandelion, and sparrow on Earth right now, there used to be a lot more. Poaching, deforestation, and other forms of human activity have dramatically reduced the mass of life on Earth. The mass of land mammals, for example, is one-seventh what it was before modern humans walked out of the African savannah.

4) Frogs are croaking from a nasty fungus

Frogs are often sentinel species that scientists study closely because they are especially sensitive to changes in their environment, like temperature, rainfall, habitat loss, and invasive species. Sentinel species also serve critical roles as predators and prey in their habitats. Their fates are harbingers of broader shifts in the environment and they are often the first to show signs that changes are afoot.

Which is why scientists were so alarmed by the spread of a deadly amphibian fungus, Batrachochytrium dendrobatidis, also known as the amphibian chytrid fungus or Bd. Scientists previously reported that this single pathogen has led to the decline or extinction of 200 frog species. But a new study out in March showed that the die-off has been even worse than they realized. 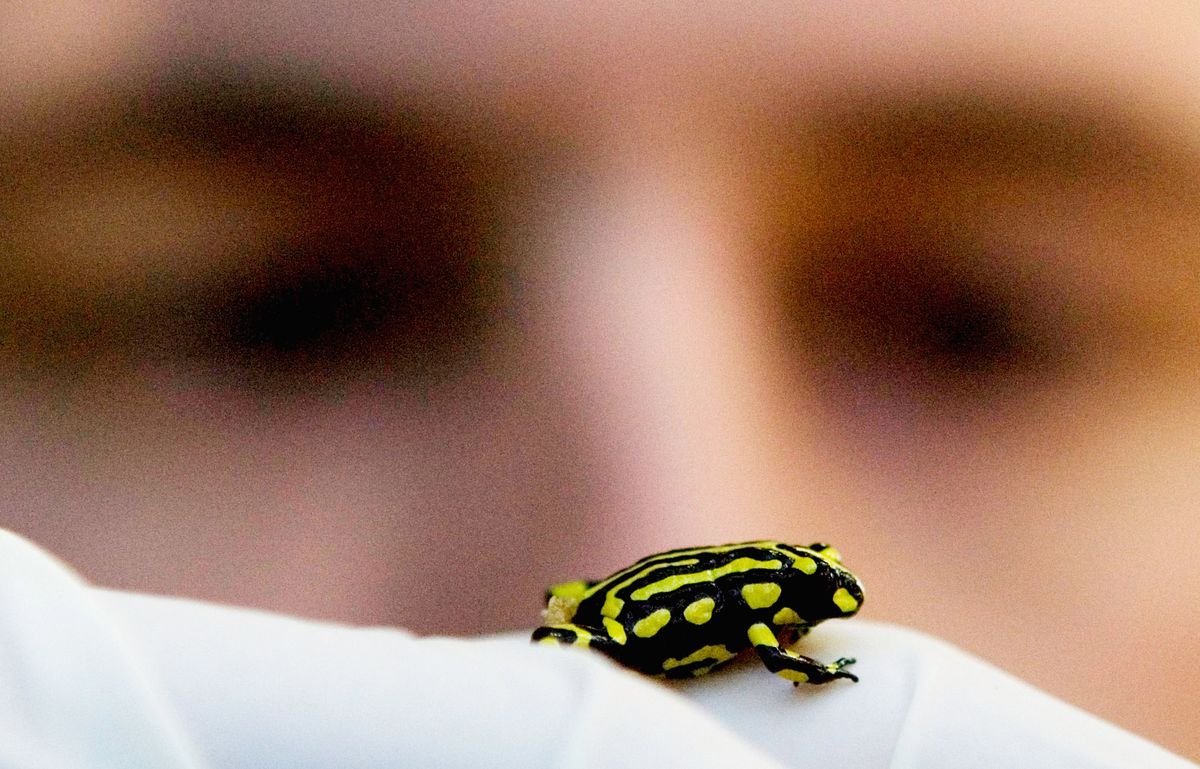 A Corroboree Frog walks across the gloved palm of reptile keeper. Only about 200 Corroboree frogs exist in the wild in their natural habitat of the Kosciuszko National Park in New South Wales. The frogs are threatened by the amphibian chytrid fungus. Ian Waldie/Getty Images

Researchers reported that Bd has driven 90 frog species to extinction and forced another 124 to decline in numbers by more than 90 percent. This population crash has only been going on for about the last 50 years.

While the fungus is deadly on its own, humans have aided its spread around the world. The disease is hard to eradicate, but there is some evidence that the pace of decline is slowing down.

5) Life is disappearing, appearing, and evolving right in front of us

The World Wildlife Fund reported that vertebrate populations have declined by a jaw-dropping average of 60 percent since 1970. That includes birds, mammals, fish, reptiles, and amphibians.

Yet even as species disappear, we do occasionally discover new ones. Scientists found five new frog species in Madagascar, for example. It’s a regular reminder that we still don’t fully grasp all the nuances of life on earth, even as we unwittingly extinguish it.

One of the new frog species discovered in Madagascar. PLOS One

But perhaps even more intriguing (and disturbing) is that we are changing lives too. Researchers reported this year that as climate change raises average temperatures, sea turtles are experiencing a dramatic change in their sex ratios. Temperature is a major variable in determining the sex of a reptile, and in one species, scientists found that female baby sea turtles now outnumbered males 116-to-1. It’s a development that could herald a population crash among turtles.

And as species move in response to the rapid changes we’re causing in their environments, we’re seeing new hybrids emerge.

The Intergovernmental Panel on Climate Change, a group of the world’s top scientists convened by the United Nations, put out a stark report last year highlighting how little time we have left to limit global warming to 1.5 degrees Celsius, the most ambitious goal under the 2015 Paris climate agreement.

The key finding is that if we want to hit this target, we have to cut global greenhouse gas emissions in half compared to where they are now by 2030. By 2050, we would have to reach net zero emissions, and after that, we would even have to start withdrawing carbon dioxide from the atmosphere.

Otherwise, the window to 1.5 degrees Celsius closes, and we lock ourselves into more warming, which will lead to more sea level rise, more devastating extreme weather, mass migrations, and expensive declines in the global economy. 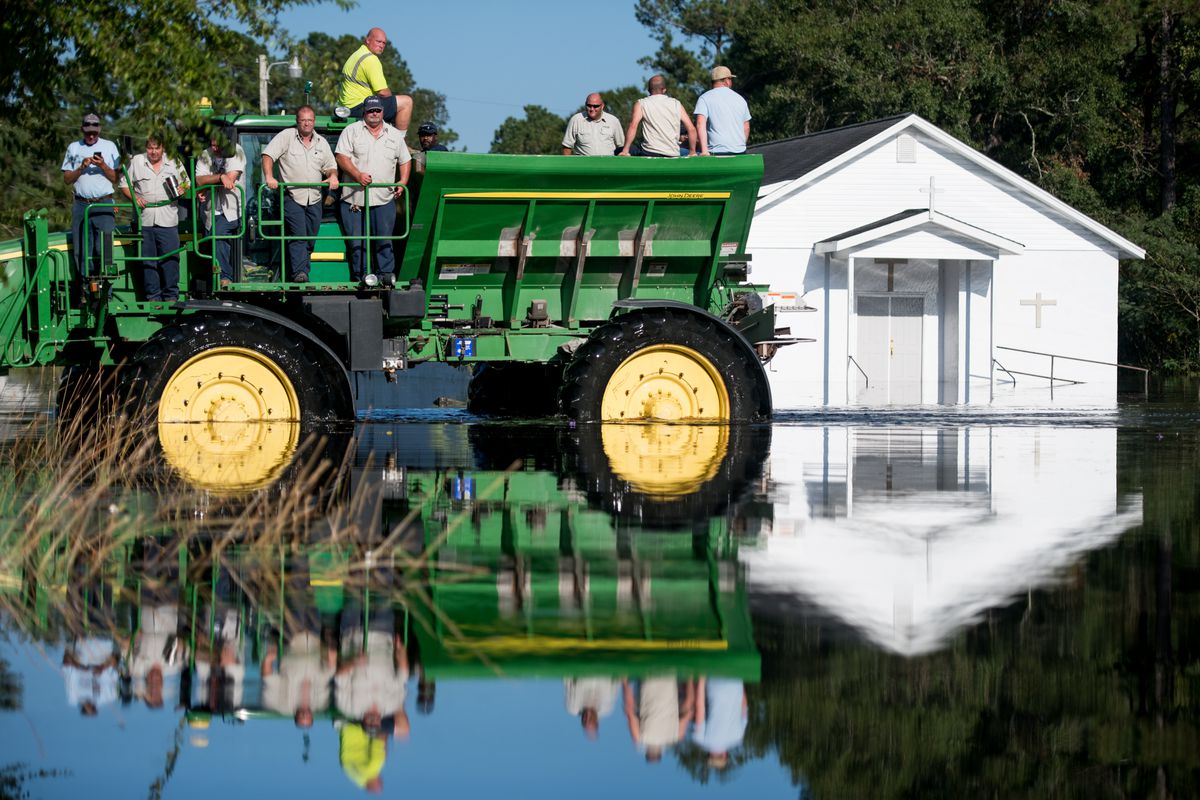 Despite these findings, we’re far off track and only getting farther. Global carbon dioxide emissions hit an all-time high in 2018. Atmospheric carbon dioxide levels crossed a record 411 parts per million, the highest levels since humans have existed. In the United States, energy use hit a record high and greenhouse gas emissions started to rise again in 2018 after years of decline.

7) A coming verdict on our right to a safe climate

A wave of lawsuits hinging on damages wrought by climate change gained momentum over the past year. Interestingly, climate science isn’t what’s up for debate in these climate lawsuits.

Rather, the key fights are over the legal rights to a safe climate and whether parties are owed damages from those that contributed to the problem.

In one set of cases, children and young people are suing the federal government for profiting off leases to fossil fuel extractors on public lands despite knowing the damages caused by rising average temperatures. 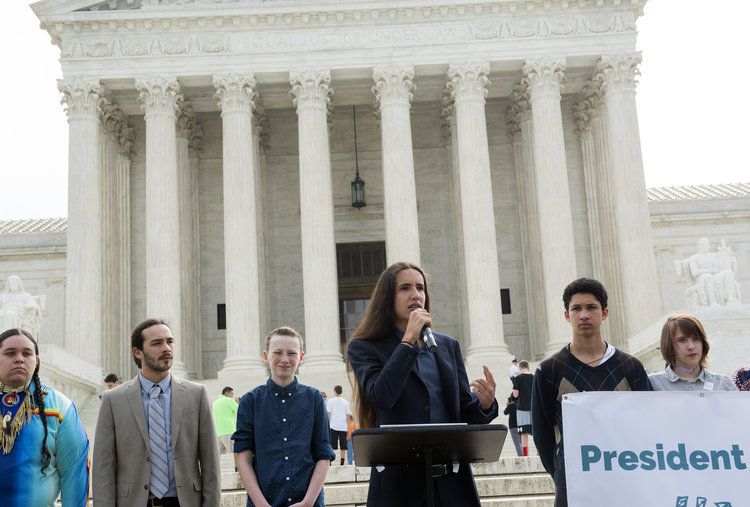 Earth Guardians Youth Director Xiuhtezcatl Martinez, one of the plaintiffs in the Juliana v. US climate lawsuit, speaks outside the US Supreme Court in 2017. Robin Loznak/Our Children’s Trust

In another set of lawsuits, cities, states, and local governments are suing oil companies for posing a public nuisance. The argument is that fossil fuels produce heat-trapping gases, which in turn cause problems like sea level rise that threaten valuable shorelines.

At stake are billions of dollars in liability for some of the largest and most powerful institutions in the world. And the cases could set precedents that stand for generations. These lawsuits are now working their way through courts, in the United States and in other parts of the world. The outcomes of these cases are critical but uncertain.